Ram Mohan was doing something different

The second half of Skholiast‘s interview with Amod Lele
Unquestioning acceptance of received wisdom is not philosophy, though faith-seeking-understanding is. I’m not enough of an anthropologist to say whether this is a human universal, but I suspect not, in that challenging received wisdom can be something of a luxury; when it’s a real question whether you can feed your family, you’ll probably just think what you’re supposed to think, and that’s as much wisdom as you need.
I find myself quite unimpressed by ideas like “conceptual colonialism” – even when applied to India, but far more so for China and Japan, which were not actually colonized. I’ve long been troubled by the prevalence of, for lack of a better word, white guilt: that is, in this context, the idea that a history of racism and colonialism means that the West and its categories should be assumed wrong, as if racism and colonialism were not things other cultures indulged in when they had the chance. “Philosophy” is of course not a word native to Asia, but neither is any other word in the English language. Translation is always a tricky business, but I think the word “philosophy” in this sense does a fine job of capturing what Rāmānuja and Xunzi and Dōgen are doing. [...]

In some ways my way of really engaging with something is to react against it. And I do find truth often emerges from conflict. That’s another theme I see coming up here, in the questions about Buddhist sectarianism and Ayn Rand: the differences between traditions can be productive in our attempts to find truth. I’ve been talking a lot with another friend who finds my ideas on hermeneutics a little weird, specifically the idea that one reads texts most productively by letting them challenge oneself (he even calls that the “Lele Doctrine”). But that’s certainly been what I’ve found: we need ideas sufficiently different from our own that they shock us enough to react against them (though not so different that we can’t even imagine what their truth would mean). In my experience at least, I’d say that’s how we really learn, that’s how we grow. [...]

And conversely: the scholarship on Asian religions and Asian philosophy for the past thirty, forty years, has increasingly become this mind-numbingly dull drumbeat of a critique of everybody who’s talked about the subject before, of people like Ram Mohan Roy, Vivekananda, Radhakrishnan: saying “Ha, ha, look at these stupid people and how wrong they all got it. Aren’t we so great because we’re so much smarter, and we know the tradition really wasn’t that way?” And yet, the thing about that line of critique is that there’s very rarely any sort of constructive alternative advanced—

S: It doesn’t tell us what they tradition was, just what it wasn’t.

A.L.: Well, they do kind of try to tell us what the tradition was; but what they don’t try to tell us is what the tradition could be. What Roy and Vivekananda, and Walpola Rahula, and Olcott, and [Anagarika] Dharmapala, and all of those people who get taken as whipping-boys today – what they were trying to do was re-invigorate their traditions, and provide them with the resources to be constructive contributors to the dialogue of the world. I read all this stuff from Don Lopez, and all these other people from the past forty years, as basically saying “shut up, go back in your hole, you can’t do that, the real tradition was what was there in 1500” – in a way that closes off that dialogue. It tries to portray these people, people like Vivekananda, as orientalists who had no respect for their tradition. But it seems to me that it’s people like Lopez who have a much deeper disrespect for the tradition, in that they want to pose this radical disjuncture, where the tradition is somehow not allowed to change and update itself.
I think what was really going on – well, the problem with Vivekananda and so on was that they didn’t really have enough of a historical awareness, they weren’t quite willing to admit that they were doing something new. But I think that where we need to go now is a willingness to do something new. Nobody now, or at least, very few people now, and certainly not scholars of Buddhism like Lopez, will ever tell you that Chinese Buddhism is illegitimate because it made all these incredible modifications to Indian Buddhism, to the point that it was completely unrecognizable compared to what the historical Buddha would have taught – even though it did all that. There are many ways in which the gap between Pali Buddhism and Chinese Buddhism is much larger than the gap between Pali Buddhism and the Buddhism of an Olcott or a Dharmapala. They’ll never say that Chinese Buddhism is illegitimate, but they’re so ready to dump on, you know, modern hippie Buddhism, and say, well, that’s illegitimate. Even when it differs less. So part of that philosophical task, of constructive dialogue now, is accepting that some sort of modification of a tradition is a legitimate part of that tradition. While giving the respect that we want to give to the ancients, we should be ready to accept some amount of modification, change, perhaps even modernization, and reasoned differentiation. 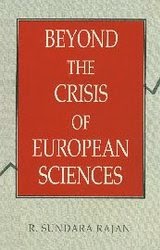 And I’m seeing some encouraging signs, in books like Andrew Nicholson’s Unifying Hinduism, and David McMahan’s Making of Buddhist Modernism, where people are saying, for instance: “Yes, what Ram Mohan was doing was something different from what came before him, but he also wasn’t just making it up. He was reading quite widely and thoroughly, he was engaged in the debates of his time, and cognizant of the debates going on in this world that really wasn’t influenced by the British. He was bringing them into this British environment, and made of them something different by doing so, but something that still had a connection to the tradition that came before it.” (The first half of this interview is here) [I am a Buddhist http://t.co/xBUyQFHKGA]

Critical Reflections on the Humanities and Social Sciences Posted by larvalsubjects [6] Comments
This article by Clive Hamilton, I think, marks what is at stake in the New Materialisms and some of the Speculative Realisms. The issue is not some hackneyed attempt to champion the sciences and objectivity over meaning, but to draw attention to the material dimensions of how we dwell and live. Today, more than ever, we need to reflect on whether the tools of deconstruction, phenomenology, psychoanalysis, Marxist critical theory, and semiotics are adequate to thinking the world we dwell in and how these theoretical orientations might erase the fundamental materiality of existence. This erasure is so thorough that it’s difficult to even discern when working within these theoretical frames for, after all, one can only see what one can see, and being is here reduced to meaning. This critical reflection is not undertaken to erase these methodologies– quite the contrary –but to mark their limits, note their blindspots, and develop a theoretical frame capable of both preserving what is vital in these forms of thought and of moving beyond those limitations. This is what is at stake in the critique of correlationism. Materiality is not phenomenality, a lived experience, a meaning, nor a text – though it can affect all of these things – but something with its own dynamics and forms of power. We need a form of theory capable of thinking that and that avoids the urge to treat everything as texts, meanings, and correlates of intentions.